Chat with us, powered by LiveChat Picking Up Trash at the Chapter House – The Green Crew 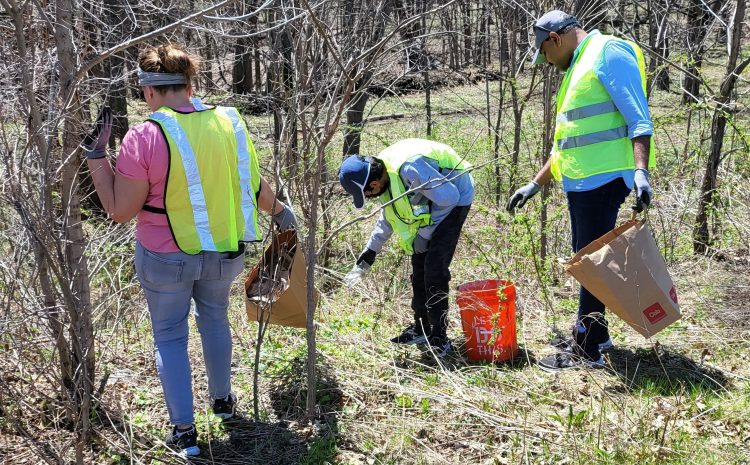 Trash thrown from passing cars was picked out of the brush

On Saturday, May 7th, a small group of volunteers picked up trash along the Dan Patch Railroad line and the Green Crew’s Chapter House trails.

We chose to pick up the garbage to keep the environment clean and renovate the forest so that the deer habitat won’t be harmed.

I came to know about the activity through Interact Club at my school. So, I signed up for the activity and joined the Green Crew to participate.

We learned a lot about where the trash comes from, how it has harmful effects on the environment, and how harmful it is to trillium and deer habitats. Therefore, it is important to pick up the trash to clean the environment. But we must also protect nature from the toxins in the waste, contaminating the soil and water and later affecting the nearby surrounding ecosystem.

The trash consisted mostly of plastic wrappers, golf balls, canned beers, spray paint bottles, soda cans, one hockey puck, a credit card, and a young deer’s jaw. Most golf balls came from “slicers” at the Country Club across the street. The plastic, canned beers, credit card, hockey puck, soda cans, and canned beers came from littering. Taggers and artists used spray paint bottles under the bridge near the railroad line. The most common trash that has often appeared in the chapter woods was plastic wrappers thrown from passing cars.

The most fun things we found were discovering the credit card that came from a women’s clothing line, a hockey puck, and the bone structure of a young deer’s jaw. We found the most disturbing things were the amount of glass and canned beers filled with leftover liquids. The most surprising part was how far it had reached the railroad line and that some plastics were covered by dirt and leaves.

The experience was very relaxing and enjoyable as well. I got to see the many items and was intrigued by what was thrown away in the woods. I learned that nature is a very delicate place and its importance for our communities and the world. People would be shocked and intrigued by the many items thrown away in the woods. Also, it helps them to relax from the stress and enjoy the beautiful weather. We also got to meet cool people along the way!

Colin Abe is a Junior at Eagan High School. This was his first Green Crew-organized activity. He is excited to join another!