Chat with us, powered by LiveChat Restoring the Northern Nature Trail – The Green Crew 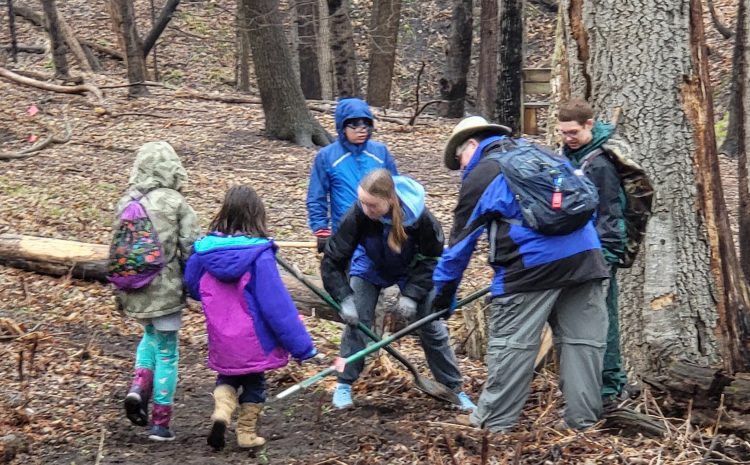 On Saturday, April 30th, nearly 50 youth and adults gathered at the Izaak Walton Chapter house to restore the northern nature trail. Under the leadership of Green Crew founding member Nicolette Johnson, and with the support of several Green Crew youth members, as well as volunteers from Eagan, Burnsville, Richfield, Edina, and Minneapolis — the .3 mile nature trail was carefully constructed throughout the northern part of the Chapter property.

Initially, there was a question about whether the heavy rain on Friday night and Saturday morning would scare off volunteers. Fortunately, there was an incredible turnout! The rain took a break Saturday afternoon, which we found made working the soil for the trail a lot easier!

The Green Crew is a youth-led science-based environmental organization focused on meaningful conservation service projects. Sometimes our projects support the Scout advancement of one of our members, which was the case this weekend. This trail restoration was Nicolette’s Summit project. The Summit Award is the top rank earned by a BSA Venture Scout. Some call it the “Eagle Award of Venturing.” The Summit Award reflects the culmination of the leadership development journey, which was shown by the incredible leadership of Nicolette throughout this project.

The trail’s location had been carefully mapped out over the past three months. Nicolette designed the trail following the deer and animal trails on the site. She also consulted with an old trail map from the 1990s and focused on minimizing visitors’ impact on the native ecosystem.

Another step in Nicolette’s planning process was a review with the Science Team. The youth on the Green Crew’s science team helped to identify the best ways that they could build the trail to protect the local ecology. The results from the research impacted where we put the trail and how we plan to maintain it.

On the trail build day, the Green Crew leadership members showed up early. They helped set up and shared lunch with volunteers who started showing up around 12:30 pm. Nicolette kicked the project off with an orientation and review of the safety protocols and greatly inspired us.

We raked, and weeded, removed rockets, and filled holes. We moved logs to define the path’s borders and then filled them in with dirt to reduce erosion. We cut, trimmed, pulled, and then did it all again! It was amazing how fast we moved through the different stations set up. Whenever you took a break and looked around, you could see people working hard on the same project and making significant progress!

After a break for fresh fruit, Nicolette and our advisor Joseph put red marking flags in problematic areas. They wanted to ensure that there were no branches that could snag a hiker or holes that could twist an ankle. When all problematic areas had been fixed, we gathered, cleaned tools, and thanked all volunteers. It was great to have so many youths join us!

To wrap up, we answered questions about how and when someone can join the Green Crew – they can participate in our activities at any age and join the leadership team at 14. Some of the volunteers were enrolled in ScoutsBSA and asked if the Green Crew could host their Eagle Project, just like we hosted Nicolette’s Summit Project. Of course, the answer is yes!

Then when all the volunteers left, the Green Crew youth stayed after and finished cleaning and packing up. We were all tired but so proud of Nicolette and the work we had done together!

This Summer, the Green Crew is hosting youth from The Blake School, the Burnsville Public Schools, and Scout units from across the Northern Star Council. The goal of these meetings will be to connect with nature, increase their Leave No Trace awareness, and do many science projects. Each of these groups will be walking this newly constructed nature trail. On the trail, they will observe the changing seasons, the impact of wildlife, species identification, and more.

The trail will take Green Crew participants to our new campsite and outdoor classroom, built at the end of May in another big service project day!

A good nature trail requires constant maintenance. We know that the weekly walks on the soil will help, but that will not be enough. Our trail projects will work in tandem with our invasive species team to prevent garlic mustard and buckthorn from spreading. We will also be planting native plants to increase the integrity of the trail. The next trail we build will support our RiverWalk project.

Join us! Check out the Green Crew and get involved!

Griff Pugh is a sophomore and one of the founding members of the Green Crew. He is working on several projects for the Green Crew, which are very confidential.